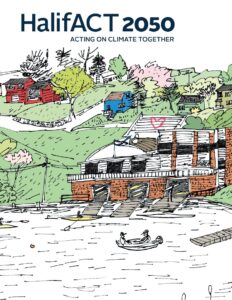 In 2019, Halifax declared a climate emergency and as a result, HalifACT was passed by the regional council on June 23, 2020. HalifACT 2050: Acting on Climate Change Together Plan is a long-term climate action plan that will help to reduce greenhouse gas emissions, help local communities adapt to changes brought on by climate change by raising awareness and helping with preparation, and aid in the transition to clean and reliable energy sources.

These tasks align with the Municipality’s goal of being a low-carbon economy by 2050. The overall goal is to prevent average temperature increases from exceeding 1.5°C above pre-industrial levels as recommended by the United Nation’s Intergovernmental Panel on climate change.

An increase in temperature along with more regularly occurring heat waves, an increase in the amount of precipitation, and the number of storms along with flooding and wildfires are what current projections show for Halifax. This extreme weather is correlated with sea-level rise, decreased snowpack, invasive species, vector-borne diseases, runoff, and other unfavorable consequences. These changes are hazardous as they can, for example, decrease water quality and quantity, cause uncertainty in the fishing and forestry industries, and overwhelm emergency services.

Building decarbonization is an a very important part of the plan. In 2016, residential, commercial, and industrial buildings in Halifax made up 3/4 of the city’s total greenhouse gas emissions. Reducing these emissions will be achieved by deep energy retrofits, switching over water and heating systems to electric, by bettering the energy usage process in industrial buildings and more. The transit system expansion and an increase in the use of electric vehicles will also help in reducing emissions within the city.

Another important area for improvement is the electrification of the transportation sector. Transportation accounts for about 25% of GHG emissions in Canada and is an important improvement area to address. The electrification of this sector is a long process that will be spearheaded by innovative programs such as the federal government’s “Zero Emission Vehicle Infrastructure Program” aimed at building Canada’s electric charging network. Accessible charging for Atlantic Canadians makes EV ownership that much easier and helps Halifax, Atlantic Canada and our country as a whole progress towards these lofty climate goals. 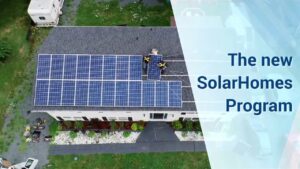 Another program currently in place that is helping Atlantic Canadian’s decarbonize is Efficiency NS and Efficiency PEI’s SolarHomes programs.These programs encourage residential rooftop solar adoption through rebates of up to $6000 and $10,000 in Nova Scotia and PEI respectively. Continuing access to these programs as well as education on the benefits of solar adoption will prove to be instrumental in lowering household emissions. The solar homes program has seen massive success in Nova Scotia and PEI in its short lifespan and other Atlantic Canadian provinces should take note. With rooftop solar representing a sizable opportunity for CO2 reduction, making incentive programs available for all will reap tremendous benefits for Atlantic Canadians.

A reduction in greenhouse gas emissions and mitigation of climate change creates positive results. Air quality is improved, noise pollution is decreased, there is more space for recreational activities, and the appearance of the city is improved. Which further results in citizens with greater levels of wellbeing.

Jobs will be created due to the decarbonization of the building and transport sectors and from producing clean energy. Additionally, savings will occur as there will be a reduction in fuel and electricity costs. In 2016, $1.5 billion was the total energy costs in Halifax. If the climate plan were not implemented the cost would increase to $1.73 billion by 2050. However, with the plan in place, energy costs will be reduced by $1.2 billion. 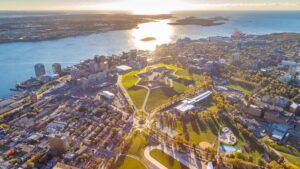 Halifax has audacious targets for GHG reductions as laid out in the HalifACT climate change plan. However, with public support and corresponding government programs continuing to incentivize environmentally focused actions, Halifax can continue to make massive strides. The city of Halifax is positioning itself as a beacon for the rest of Atlantic Canada and ultimately the entire country, to strive for a future in which our GHG reduction targets are met. Our lives and livelihoods will depend on it.